Brace yourselves for deliciously seasoned and perfectly coated seitan from ‘How On Earth,’ who are a family run vegan food business in Devon. Their home made seitan chunks could be said to resemble what is traditionally known as Southern Fried Chicken, or what you’d pull out of a commonly known KFC bucket. ‘How On Earth’s’ seitan comes in a variety of ‘fake meat’ substitutes such as bacon, hoisin duck, kebab, and chorizo. Not only do I love ‘How On Earth’s’ amazing seitan creations, but I also love how focused and beautiful their branding is.

I first came across ‘How On Earth’ at the Guild Shop in the University of Exeter’s Students’ Guild, where they stocked a variety of wheat gluten based snacks and lunches, including hoisin duck wraps, noodles with seitan pieces, and pesto pasta. They also had a few sweet treats that were sold for a bargain price of just 99p- making it even harder to resist a quick pre-lecture snack. Chocolate chip cookies, vegan ‘honeycomb’ cookies, and brownies were amongst the sweet snacks that were commonly stocked on the ‘How On Earth’ shelves. 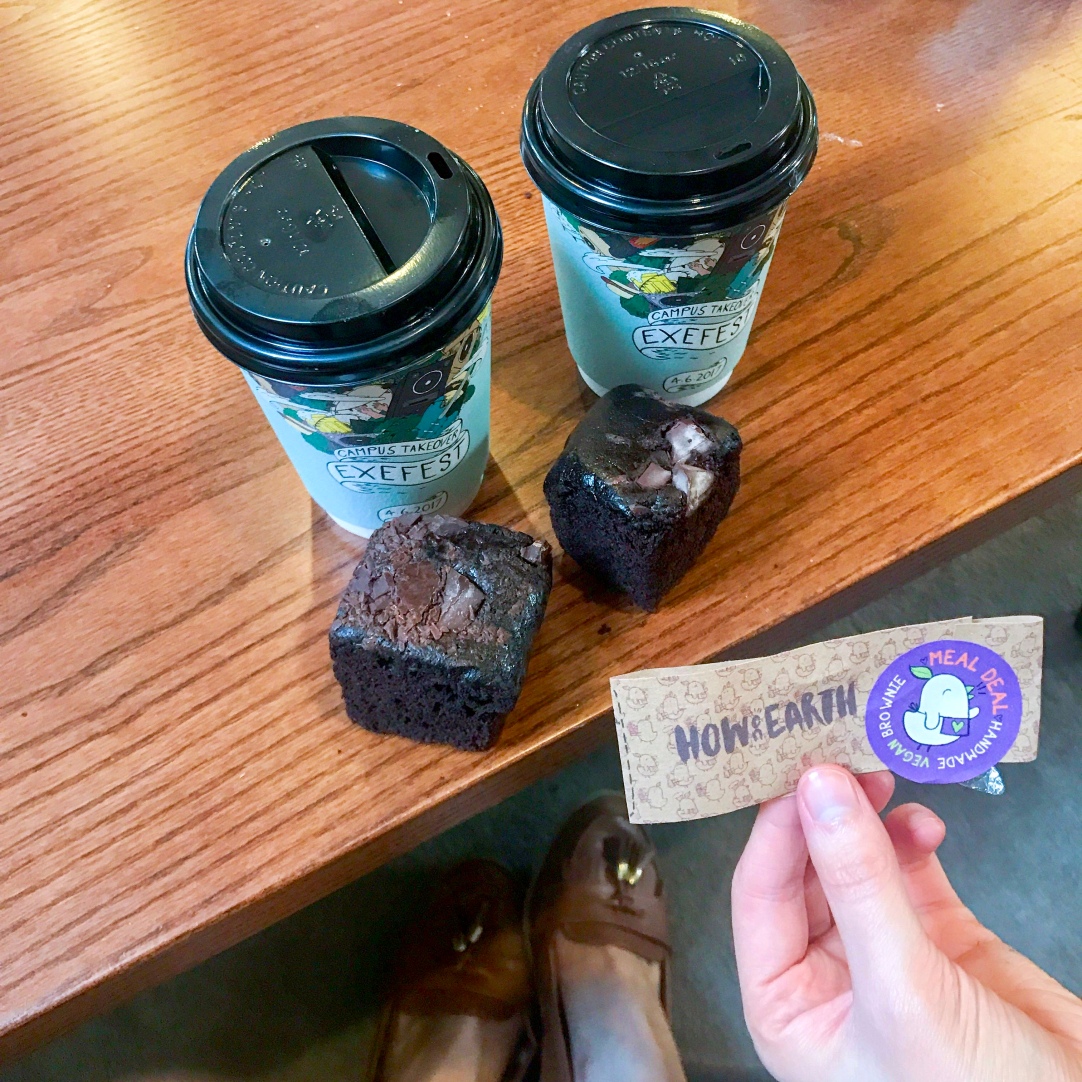 I started off the academic year by taking packed lunches to University and meal prepping  for long days in the library, but once I’d discovered the ‘How On Earth’ wraps from the Guild Shop, I couldn’t get my hands off them.

It was so exciting knowing that my student’s guild shop stocked items from a local vegan business and even had dedicated shelves for them with a special meal deal for ‘How On Earth’. I usually ended up getting a wrap and a cookie for lunch more often than not. Until then, I’d only had seitan in the form of burgers, but the ‘Chicken Strip’ style pieces packed into the wraps were perfectly coated and seasoned for my liking.

Later on in the year, I went to Exeter’s first monthly vegan market at the Corn Exchange, where I anticipated tasting ‘How On Earth’s’ display of yummy tasters. They had the following four mock meat style seitan samples: Southern Fried Seitan bites (they came in junks and resembled southern fried chicken bites), the seitan doner kebab strips, the ‘smokey bacon’ style seitan rashes, and the chorizo style seitan. I bought a container of the southern fried seitan and the doner kebab strips, providing so much versatility in the kitchen!

I spoke to the owners who were stood behind the stall at the Vegan Market and they were both so lovely and sweet, it left such a positive lasting impression. I genuinely believe that it is so important for businesses to communicate with their customers and to gain a perspective of what people enjoy about their products. On their website, ‘How On Earth’ champion themselves on being “proudly plant based,” which is amazing for the vegan movement as a whole in showing that great tasting food doesn’t consist of any cruelty to the animals or the environment.

The southern fried seitan chunks were so delicious within themselves, I couldn’t help but eat some straight out the container. The seitan chunks had such an amazing texture and they were so succulent, they didn’t need to be accompanied with any sauces, condiments, or spices. However, I did manage to save a handful of seitan chunks for a wrap, where I sliced up the seitan and added it with lettuce, avocado, tomatoes, sriracha mayo, and fresh red onions! I wish I’d taken a picture of the wraps, but by that point I was too excited to devour one of the most delicious vegan ‘junk food’ home made meals.

With the doner kebabs, I could have added them into a Lebanese pitta, with tahini, lettuce, and some baked chips (highly recommended)- but I was super adventurous and made kebab pizzas with them! I had some WhiteRabbit pizza bases lying around in the fridge, so I added tomato passata, mushrooms, spinach, violife shredded cheese and ‘How On Earth’ seitan kebab strips ontop.

‘How On Earth’ can be found at Exeter’s monthly Vegan Market at the Corn Exchange– click here for the facebook link to the next event in September.

You can find ‘How On Earth’ on their website, facebook and instagram, where they post regular updates and behind the scenes of their recipe testing. They were experimenting with a vegan seitan burger on their instagram story a few days ago, which looked so tasty and delicious.

My passion for vegan food and cooking has inspired me to set up a blog where I post food recipes and restaurant reviews that offer plant based options. I started my journey on instagram, where I shared my passion for fitness and vegan food on my profile and then created this blog for a chance to post longer and more detailed recipe and review posts. View all posts by nutritionalnatasa

This site uses Akismet to reduce spam. Learn how your comment data is processed.

Connect with me on: